On January 5th, I arrived in LA after traveling for the holidays. That evening, when I made it back to the bungalow, I opened the door to find my roommate, The Great Warrior, having a few beers in the kitchen with a friend of ours.

“How was Indiana?” I asked the Great Warrior. He got back from his hometown of Lafayette, Indiana, the day before.

“Well, not great…and it got worse. My mom passed away while I was there.” He looked down, took a deep breath and hissed it out with a sad little laugh. “It’s weird, I only choke up when I tell somebody.”

The Great Warrior’s mother had spent the last few years in a nursing home in Lafayette, as Altzheimer’s disease steadily conducted it’s onslaught on her mind. Every Monday, he’d skype the nursing home and talk with his mother, if she was able to. Graduallly, he’d taken charge of her affairs, paying her bills, was the liaison between her and the nursing home.

“I was at my dad and stepmom’s when the nursing home called. I got there, went into her room and there she was. But hard part was when I went back into the room later that day to get her things and her body wasn’t there.” Looked down, deep breath, hissed it out. “I’m going back at the end of the month for the memorial.”

The following week was a long quiet week for The Great Warrior. I’d walk by his room to see him working on the eulogy, sifting through stacks of photographs or curled up in a ball, sleeping but not really sleeping. Every now and then he’d come out for a cup of coffee, pace or stand in the doorway staring a million miles into the cobalt-blue California sky. Then more photos, writing, sleeping. Then more coffee, pacing, staring. Then night. Then morning and more coffee, pacing, staring, photos, writing, sleeping…

“Hey, check this out,” he said, holding an old, black and white photograph. “My mom. I’m guessing she’s about 20 years old there.”

The Great Warrior’s mother had porcelen skin, black hair in a pixie cut and her big dark pretty eyes stared up and to the left, far away to something that she so very much hoped would happen someday…surely IT must happen someday, right?…I looked up to The Great Warrior. I may have been staring at an old photograph, but he wasn’t holding a mere picture. He wasn’t even in the room. He was with his mother, my guess was that the two of them were putting their heads together trying to determine what exactly did, and didn’t happen in the ever shapeshifting Past. Then, suddenly, he re-entered The Now with a deep breath and a hiss, walked down the hall, went into his room.

A traveling carnival came to East Hollywood last week, setting up in a parking lot of a hardware store that’d recently gone out of business – on the corner of Sunset and Western Boulevards. A plethora of withered carnies draped in billowy, tattered clothing permanently caked in grease, moved about slowly like an army of last harvest’s abandoned scarecrows as they assembled the rides and booths. At the bus stop at Sunset and Western, The Vigilant Congregation of winos, wackos, drifters and drug dealers stood, gaping with deadened bewilderment at the carnies…Gee, a carnival, here? Well, alright…

One night, I walked by the carnival to see long lines of little Mexican-American boys and girls pecking at huge bales of pink and baby blue cotton candy as they waited in long lines at the rides. The screams from the little boys and girls already on the rides pierced the cooling night air like glass-cracking thunder. The tip tap tip taps of the shooting gallery served as a cadence to the evening.

“Nobody knows the trouble I seen,” sang an old Black carny at the throw-a-ping-pong-ball-in-a-cup-and-win-a-prize booth, “nobody knows but- hey girl,” he shouted to a woman standing at the booth. “I know, you’s tryin’ figure out the trick of it, ain’t ya? Well, they may be one, but’chu gotta go to Carny College know it, ha, ha…” The girl walked off. “Hey! Come on now, I need a player! It’s so easy! Ha, ha...nobody knows the trouble I seen…”

All along Sunset Blvd, Mexican-American men and women grilled chorizo y peppers to sell, along with glow sticks and flashing pinwheels. Customers walked about, eating from one hand and held, with the other hand, the hand of a kid holding the hand of another kid holding the glow stick or pinwheel. The kids in the middle cried because they didn’t have there own glow stick or pinwheel. At the bus stop, stood The Vigilant Congregation. These Nowhere or Everywhere men and women stood like sculptures as the flashing lights bounced green, blue, yellow and red off their Nothing or Everything faces…Gee, IT really is a carnival? well, alright, then…

One afternoon last week, The Great Warrior and I were tossing a football around in the narrow driveway between our bungalow and the neighboring apartment complex – he’d begun to feel the need to leave the bungalow a little bit each day, in between coffee, pacing, photos, writing etc. It was a youth size football, which came out of our older, larger hands in a very wobbly manner. We kept adjusting our grips with each pass, to get a better spiral.

“How’s the eulogy coming along?” I asked, threw the ball.

“It’s not,” said The Great Warrior, after catching the ball. “For some reason I can’t think of any memories of her when I was a kid. None at all.” He threw the ball. “I’ve been going through her book, though.”

Catch. “Yeah. I feel horrible because I never read it when she was alive. I’ve had it for years.” Throw.

“You can read it now.” Catch. Throw. Our spirals were slowly improving.

“I’m trying to go through it, to maybe find something to talk about.” Catch. “But it’s a historical romance tragedy.” Held the ball to his eyes close. It was getting darker and he wanted to make sure his knuckles were on the right seams. “It’s a shame. By the time she finally had it they way she wanted it and was ready to begin the publish process, her mind…you know…” Throw.

The pass had a tight spiral, but was high and wide. I jumped up, caught it, nearly running into the cinder block wall of the neighboring apartment complex. I took a look into the sky and noticed the evening’s first stars were shining. It was too dark to throw anymore. “We should got to a park next time,” I said, following The Great Warrior inside the bungalow. “Then we’ll really be able to throw.”

“We should do that,” he replied.

Later that night I took a walk through Los Felis. The nearly full moon hung high in the clear black sky like a bright fresh mothball that I could easily pluck from the sky. The still, brightness of the Moon seemed to accentuate the twinkling of the stars near it, flashing in blues, whites and reds as they visually telegraphed their cosmic histories.

“See!” screamed a tweaking hipster from out of his long crinkled beard. He was standing in front of a line of people at a taco hut on the corner of Vermont where Hollywood Blvd turns into Prospect Ave. “I was about to tell you and you…!” He moved his body about in some weird kind of dance, slapping his thighs every now and then and pointing into the night. “But you keep hanging up…” he doubled over, laughed…”keep hanging up!”

The Moon brought down chalky white light on the scene. Nobody at the taco hut paid attention to the screaming fellow. Frowning people weating nice clothes and earbuds feeding them the numbing nectar of their smartphones passed by him like phantoms. Unfazed, the fellow kept screaming at whoever it was that hung up on him. 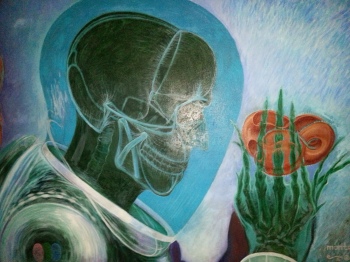 As I walked on, I kept seeing The Great Warrior’s mom, staring up and to the left at that marvelous and scary mystery before her. But from my view, it was nothing really mysterious at all: birth, youth, some good stuff, some bad stuff, older, a baby boy, divorce and some more good stuff and bad stuff, a twenty-something year old son. Friends, friends drifting away, a little more good stuff and not so good stuff. An thirty-something year old son. Getting older, new friends, friends passing away, a book. Then the tricky, perforating of the mind. Then death, and a forty-something year old son to eulogize her. That’s it. Life is simple. But when I look up and to the left with that same long stare as she has in the photograph, it all gets marvelous and scary. All I can see are the flashing lights of what must be exhilarating rides…surely they must be, right?…one ride after the other.

1 thought on “Gee, It Really Is A Carnival”