Last week, my friend, Mia hired me to build a table out of two old wooden doors. The doors were coated in several layers of paint, applied throughout several decades, except on the corners where the paint had peeled away, exposing brittle and cracked wood. 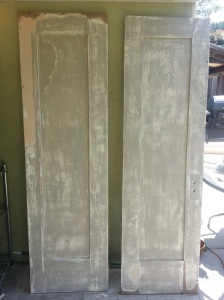 Stripping all the paint off the doors would’ve taken more time than was worth putting into the project, so I sanded over the doors until the dull gray topcoat of paint opened up in spaces exposing a white coat, then a pink coat, then a blue coat. Also, since I wasn’t stripping off the paint, I thoroughly sanded the edges of the paint around the areas of exposed wood – the smoother the edges, the better the seal I’d get with lacquer. Sanding took most of the morning. When I was done, wiped the grit from my reddened eyes, blew from my nose paint and wood dust that was older than my parents and stepped back to see that both doors had an uneven, yet consistent appearance.

It was a still, hot day with few clouds. The afternoon sun was blinding, reflecting off the lacquer as I applied it. My arms turned from tan to pink to red as I brushed. My face was caked with dust and dried sweat and my eyes were a little irritated. When I finished brushing on the lacquer, I rubbed my eyes, looked real close at the finished doors. By then it was the evening, and in the gloaming the doors glowed as if they had a lights inside them. The lacquer Mia had chosen was clear, but oil-based, so a slight amber tone came with the shine. The grays, blues, pinks and whites were so rich, so distinct, but all colors blended subtly with each other, like the inside of a seashell – it was hard to see where one color ended, and another started. And, the exposed wood at the corners appeared younger, healthier than its previous ashen, brittle appearance.

I was shivering in the evening breeze, as I gathered my tools. Mia came out and liked what she saw. I said goodby to her and walked to the bus stop. By the time my bus arrived, the job had lifted from my shoulders and exhuastion had set in. I slouched in a seat, tucked my tools under my legs. I felt like a real artist – transforming matter from useless to useful again. However, I felt no grand sense of creativity. In fact, as the bus jerked from stop to stop down Hollywood Boulevard, I became convinced that Creativity was an illusion. All I really did was simply expose and illuminate what was already there. I just happened to be open to what was there, and by being so, and trusting my own capabilities, a process of transformation took place. Art is transformation, not creativity…it is discovering what’s within something – whatever’s in front of you – and…holy cow…it wasn’t the doors that underwent a transformation, it was…wow…

Two days later I flew to Texas. My friend, Luis Galindo, was staging the first reading of the book he wrote and I edited, Electric Rats in a Neon Gutter: Poems, Stories and Songs. The book is a semi-damn-near-completely autobiographical collection of musings about love and loss and booze and drugs and hatred and sorrow and ghosts and injustice over several bruising rambling years – though, all the way through, Luis searches for The True, The Pure, The Light. The reading would take place at Stages Repertory Theatre in Houston, a city where many of the tales within the tale take place.

I landed in San Antonio, spent a day with my mom, sister and her family, then hopped in my mom’s car and onto I-10 East to Houston. I sped down the interstate, bobbing and weaving around 18-wheelers, slowing to the speed limit when I saw State Troopers on the horizon, then speeding up again after passing them. The drive was old, familiar, which was odd because it’d been over 16 years since I’d been to Houston, for a wedding…

…my friend, Matt’s wedding. I remember pulling into Matt’s driveway, walking into his house, cracking open a Budweiser…then cut to me standing outside of the tent where the party after the wedding was being held…swaying slightly, smoking a cigarette, staring down at the patent leather shoes that came with the rented tuxedo…they are too small and my feet ache…I drink dark wine fast from a plastic cup…I want more wine, but I don’t want it to appear like I’m The Drunk at the wedding…granted I am The Drunk at this wedding, but what other people don’t know won’t hurt them…I lift one foot off the ground at a time like a flamingo, gazing up at the night sky, then back to the tent, to see if I could make an inconspicuous dart to the bar...it doesn’t appear that a covert trip to the bar and back without being noticed is possibility, but it’s a mission I’m obliged to undertake…I finish the cigarette, walk to the tent…but everything goes black after that…I hadn’t been to Houston since, or seen Matt, for that matter…

Luis was waiting for me at the theatre. Throughout the afternoon, we went over the order of the pieces Luis would sing, read. Then I timed him as he rehearsed the pieces, to get an idea of the length of the evening. When he’d rehearse a song, he’d pace the stage, strumming his guitar as if the chords he played told him where to step…

From the song “Adios Chica Linda”:

and I’ve sure been tired

I’ve been up, down, below the ground,

I’ve been stoned, drunk and wired

I’ve had every occupation that a man can hold,

I’ve lost every single thing but my heart and soul

and I sure got a bunch of problems, or so I’m told.

Brian, the lighting technician, played with the lights to find a good tone for the evening. One by one, each light – pink, blue, amber – illuminated Luis differently, as if he was a different person in each light. The familiar songs and poems came to me from unfamiliar directions, like new things that sounded older. The lights bounced off his glasses and guitar as he paced around. By the time Brian finally found the right lighting – a combination of all the lights, naturally – Luis had transformed from a guy rehearsing to a man onstage.

“It doesn’t seem real, man,” Luis told me, after rehearsing. “Feels like I didn’t write any of it.”

“The good stuff always feels that way,” I said. “The real stuff is always humbling, scary.”

As 7:30 – the starting time for the reading – neared, Luis grew more and more nervous. “I don’t get this nervous when I’m doing a play,” he’d say, or, “Shit, I didn’t even feel like this when I did Macbeth.” People began to arrive and Luis greeted everybody, shook hands, smiled. The crowd gave him something to do but also drove home the fact that everyone was there to see him. Every now and then he’d rumble passed where I was selling books and tending bar, mumbling, “Jesus, I’m f#$kin’ nervous,” under his breath.

The book is about a certain periods of Luis’ life from which, now, he’s very different. And today, he knows those versions of his Self better than when he actually was those Selves. Time has revealed those Selves to Luis, and he is able to see clearly the transformation(s) he’s undertaken over the years. But no matter what, that’s a lot of Selves to handle, and when the clock hit 7:30, Luis saw all the Selves he’d ever been coming at him. All he could do was walk to them and greet them because the audience was already seated and waiting for the show…

He was a fearful hunter

in the heart’s tangled jungle.

for failure but didn’t show them.

He ripped off time

and charged his wallet

for the left over crumbs

of his unfinished business.

He would write promises

but his scribbled notes

at the moments when it counted.

He walked through gardens

as their grandma’s chiles ripened

and magnolias kept their mouths shut and the roses were busy

In those lonely moments

when there was no one to lie to

he would tell himself

was going to be alright

for the lonely hunter kept the sun on his face but no light, no light no grace

…he was a little fast starting out. But he found the night’s rhythm and soon he had the crowd laughing, gasping, sighing, even tearing up with him at every turn. Luis commanded the stage, without the skin of a Macbeth or Galileo or Stanley Kowalski, or any of the other great roles he’s played, to cover himself. He was Luis, the simplest and most complicated character he could ever play.

Before we knew it, the reading was over, the free beer and wine was gone and the crowd had dispersed.

“The whole thing…none of it feels real,” said Luis, in the parking lot.

“It will tomorrow…maybe,” I said.

The next morning, I headed back to San Antonio to spend a few more days with my family. I-10 was fast, fast, fast. Truckers hogged the blacktop as they made out with smart phones. Black and white State Trooper vehicles lay beached on the side of the interstate like killer whales waiting for absent-minded seals. Every now and then there were multiple troopers around a car on the side of the road – it’s trunk open, the troopers searching the car as a Latino or white trash couple stood frozen with their heads down and 2 or 3 children holding their hands and crying. I would pass by these scenes within group of speeding 18-wheelers as if I were seeking protection within a school or some giant industrial-grade species of whale moving at the speed of Economy! and too big and stong for the little Orca troopers to catch in open water.

I got back to my mom’s house, walked in to find my 7-month old niece, Arabella Rose, sitting on the floor, staring up at me. She stared at me the entire time I was there. She’d smile, wave her hands like a bird, shout, cry, burp all over one pastel blue or pink or white jumpsuit after another, smile again, etc…always staring. 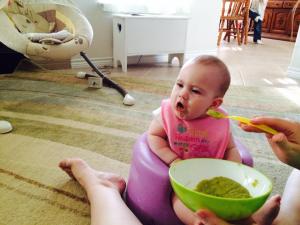 “I was here just two months ago,” I replied.

“That may as well been 10 years ago to her little mind. To her, today, you’re brand new.”