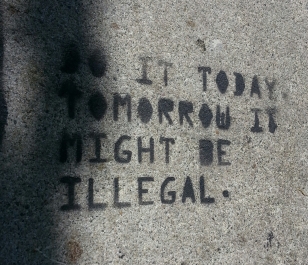 Just ‘cause you’re not paranoid…

Last Sunday, I was hired to review the 3rd Annual Zeitgeist Media Festival at the Avalon Ballroom in Hollywood. Musicians, comedians, visual and performance artists, along with various other speakers combined forces, touching on the political and social topics that give shape to the Zeitgeist Movement – an online crusade calling for the elimination of money, redistribution of resources, and for a technology-based focus to propel humanity out of its current dog eat dog reality (here’s their mission statement). In short, it calls for complete, global revolution.

The Zeitgeist Movement has a large, faithful online following, and on Sunday they had the chance to get revolutionary with each other in person. Many wore the expression of general distrust of the status quo upon their brow. In the cold dark ballroom, all conspiracies were fact. A Zeitgeister could freely profess his/her belief in aliens, androids, that 9/11 was an inside job by the U.S Government, that banks rule the world and We The People were no more than comfortable slaves. Osama bin Laden and Al Qaeda were fabricated enemies to keep Americans punching the clock. Religion was for fat, dumb middle-America and IT WAS TIME FOR EVERYBODY TO WAKE UP, DAMMIT! One could condemn the dollar and all currency to rousing cheers, then donate to the non-profit companies in the lobby, or buy a vodka-tonic at the bar, then take a hit off their pipe and dance up against a hot Zeitgiestsita with rhinestones glued to her face – up against her real close, with one hand doing rave-y waves in the air and the other holding up their baggy yet skinny jeans, their Nike’s claiming great traction on the dance floor. 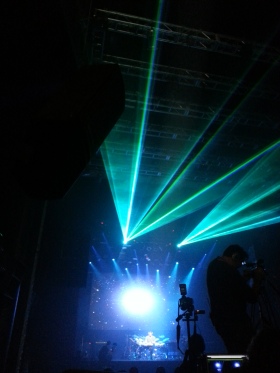 I agree with most of what the movement calls for. And I love a good conspiracy – sometimes a little too much – but I have to say I was a bald eagle raising, oil drilling Toby Keith t-shirt wearing Baptist compared to this lot of angsters. But there simply too many conspiracies caming together in the Avalon Ballroom on Sunday, begetting a cloudy atmosphere of unresolved emotion. This nameless energy only ended up festering, growing into itself – too many directions led to no direction. The bit of conversation below summed up the event better than I could.

“Yeah,” said a fellow chatting up a girl next to me, “Zeitgeist opened my eyes, like, to all the injustice and slavery around, you know. I mean, everything’s bullshit, everything we think is real is a lie.”

“Yeah, but I like, found my spirit since I got hooked into Zeitgeist. ‘Cause it’s all about the love, you know. Like, no god, but all spirit.”

“I was raised really Christian,” said the girl. “Like, it was God, all the time.”

“I just got my medical marijuana card, how cool is that?” 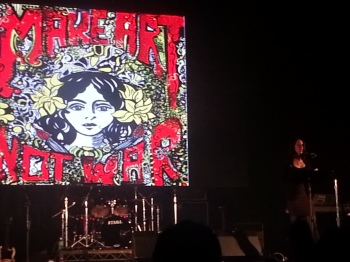 As I sat next to the two kids on the concert floor, questions flowed through my mind. Just what do I believe? Where do I stand with “this” or “that”? I want things to change too. But how do I want them to change, and what direction, exactly, do I want them to change? Does any of THIS have a damn thing to do with me? Do these two kids know I’m listening to them? Do they see me having this conversation with myself. When did I become a reviewer? I just came out here to build a set. I’m probably 15 years older than these kids. How the f#$k did that happen?

On Wednesday, I went hiking with Jason, an old friend of mine. I met Jason 12 years ago, in an alley outside an old warehouse in downtown Chicago at 4am while refilling my cup from a near empty keg of beer. The party had ended long before and we both felt an obligation to drain the keg. It turned out that we were both actors so we had a lot to slur about. Years later we both ended up in NY – continued our friendship there as we mellowed out, got older, careers got hazier. Now, Jason and his wife, Jennie, lived out here in LA and were expecting their first child.

“We went to the doctor yesterday and saw her on the sonogram,” said Jason, as he drove us into the Hollywood Hills. “She’s either very shy or not shy at all…she kept turning her butt to the camera. You could see everything, she’s definitely a girl. That’s the only naked picture I ever want to see of my daughter.”

Jason’s still an actor. But he works at a restaurant on the weekends, and travels all over the world teaching project-presentation workshops to corporate executives. Of course, he also has all the office skills from years of temping, too, which come in handy from time to time. But lately, he’s been looking into property management, in hopes to get a break on a more suitable living situation once the baby arrives.

“Everything’s so expensive,” he said. “But maybe we can find a fixer-up. I can ply my carpentry skills and get it into better shape and later on, if there’s a school district issue or something like that, we’d have capital to move. But Jennie and I gotta knock off a little more debt to do that…jeez, the student loans killed me, man. I will die in that debt. Man, I can’t believe you haven’t been to the Batcave yet.” 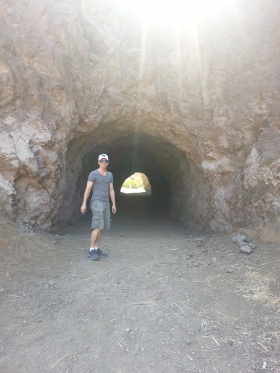 Jason and the Batcave

After parking the car and walking a short distance, we were at the cave featured in the old Batman TV series starring Adam west. Jason ran up to the entrance.

“The Batmobile came right out here and drove right down there! You remember?!”

I did remember, and time got flimsy, then. Suddenly, I’m sitting in the living room of some babysitter’s house out in the country, a million miles from anywhere. Duh nuh nuh nuh…duh nuh nuh nuh…duh nuh nuh nuh BATMAN!!! blasts from the speakers of an old TV festooned with rabbit ears wrapped in tinfoil. I’m sitting on my knees leaning forward – my face too close to the TV but my mother isn’t there to tell me I’ll go blind, and the babysitter doesn’t care. There’s Adam West in his bat-tights, saving Gotham again. He’s so cool. Man, when I grow up…

Later – as we walked up the path leading to the Hollywood sign – I practiced a pitch for my own TV show that I was to present to a producer on Friday. Jason listened thoughtfully, offered me suggestions to solidify the premise, etc. But after that, conversation came and went. There was no need to talk continuously, and the heat and incline made for labored speaking. We’d been silent for several moments when we passed a pregnant woman power-walking back down the hill. She huffed and puffed, wore jogging shorts and a sports bra – her bare, bulging belly glistened in the sun. Jason applauded her.

The woman smiled. “Thanks,” she said, between deep inhales.

Further up the hill, we came upon a trail ride. Two vaqueros – one in the lead, one in the back – ushered several blonde, sunburned, scared Dutch tourists down the path, inches from the cliff’s edge. The horses followed each other closely – nose to ass, eyes down, not excited. The dull clop…clop…clops of their hooves couldn’t escape into echoes due to the final silence of the heat. A ghostly low cloud of red dust remained on the trail, after they were gone. When we rounded the next bend, the Hollywood sign came into view. I’d never been so close to it, and it was possible to get closer. But Jason stopped, looked at his watch, then looked to me and shrugged his shoulders.

Later that evening, Luis and I hung out in front of the bungalow on the wooden frame of his futon. He’d sold it to a friend and we were waiting for her to pick it up – sitting on it so no one would steal it, and so no winos would make it their home. It was a pleasant evening – cool and shady, narcotic silence. For some reason, I spoke. 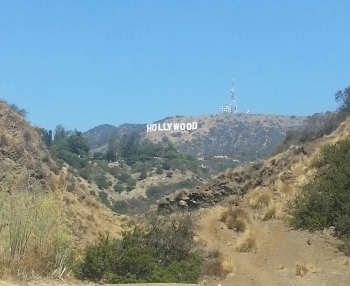 Friday morning, I went to the producer’s office and made the pitch for the TV show. I checked in at security… I just came out here to build a set…at the front desk of the old building that used to be Warner Brothers Studios, at Formosa Avenue and Santa Monica Boulevard. The United Artists offices used to be in the building, too. Pictures of Charlie Chaplin, Mary Pickford, Douglas Fairbanks Jr. – UA’s founders – hung on the wall. Then I made my way up the old, leaning stairway. It was hard not to be awestruck in the ancient building. So many ghosts passed me in the narrow hallway lined with old wooden doors…I just came here to build a set. Time lost shape again. Once more, I’m a kid, watching some movie underneath those foil-wrapped rabbit ears. It’s an old black and white feature – maybe Abbot and Costello or The Werewolf or Tarzan – after the news on a Friday night. My mom hasn’t picked me up yet – the babysitter’s there, not really watching, just sitting on the couch. Crickets clack away in the night. A million miles away…I just came here to build a set.  BOOM. Time regained it’s rigor and I was back in the studio’s hallway. Some of the doors were open. Movie and TV chatter snuck out of the cramped offices. 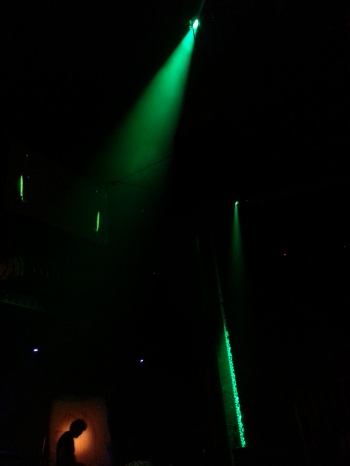 Who is anybody, really?

The meeting was set up by a mutual friend of mine and the producer. I’d written many scripts and played many roles over the last 17 years. I like to think they’re all readying me for loftier roles like Hamlet, Iago, Brutus, or maybe Lear when I’m older. But the show I had to pitch on Friday was about a actor-writer-type fellow who travels the country working wherever, however, to make ends meet, getting to know the people who hire him, take him in, drop him off at the next town – a 21st Century Hobo. Just before I knocked on the door, I asked myself, How did I get to this door? Just where do I fit in, in all of THIS? What do I answer if somebody asks me who I am? But the secretary answered the door much quicker than I expected, saving me from such a foolish line of questioning. Seconds later, I was making the pitch. 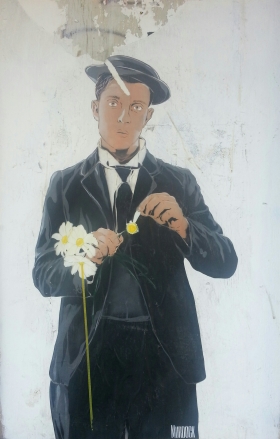 Buster Keaton, just for the hell of it.

“I like your idea, it’s interesting,” said the producer. “I want to be involved, and am willing to help you. But it’s going to be a hard sell. Right now the networks are only shelling out for drunk housewives and duck hunters. So there won’t be any money to start. But if there’s any way you can get some episodes shot yourself…if you can show them what you can do…then we might get a network interested.”

What do I got to lose? I just came out here to build a set.