Friday, I finished my career in the wig business.  I’d spent most of October – i.e. wig season  – picking up wigs, packing wigs, and hauling wigs to the post office, all in the swirling universe that is Metropolis’ Fashion District.  It was a dizzy gig at times, and for a while I felt caught in a vortex of human hair, didn’t know which end was up.  So busy, our lunch was sometimes on the company’s dime.

“Anything you want.  Have you heard of seamless.com?  It’s great, you do everything online, even tip.  You don’t even have to talk to the delivery guy.”

Boy, that’s efficient.  In no time, there’s a knock on the door.  I answer it and see an Asian man wearing a raincoat under an emotionless gaze, holding our grub.  I take the food, then stand there like an idiot as he walks off, his hands down.  Before seamless.com, he would be counting his tip, maybe folding it neatly, putting it in his pocket, under his raincoat.  That little wad of cash would have made it almost worth the deadly bicycle ride through the crazed cavalry of taxi cabs, the hassle from security in the lobby, and the sneers and frowns of the annoyed young professionals who have to smell the food as he rides with them in the elevator.  But in the long run, I’m sure he’s OK with it, because I’m sure people are tipping as much as they did before seamless.com.  Yeah, surely, people are tipping as much.

My belly filled, I take the freight elevator – I have to, because I had a dolly with me.  Jose, a young and bald, muscular fellow, runs the elevator.  He smiles and says “ola”, for we’ve struck a report with each  other.  Then he frowns, because one of the businesses on the floor has left their trash by the elevator door, right underneath a sign that says:  “Do Not Leave Trash By Elevator Until After 5PM.”  It’s 1:15PM.

“They just don’t care man,” says Jose, as he picks up the leaky bag that reeks of old food.

Jose delivers me to street level.  Then he does push-ups, and will continue to do so until the elevator is called again.

I go to the wig warehouse, where Angel, Miguel and Marco work.

Angel says, “Jeez, man, I’m gonna set up an office for you with wig boxes, since you’re here all the time.”

The general hilarity of the wig business.

We always share a laugh over the general hilarity of the wig business.  I was already missing them as I wheeled through the wig strewn warehouse on Friday, on my way to their building’s freight elevator.

But my spirits are picked up by another Miguel, who runs the freight elevator.  He’s always smiling, and we spend our time together talking baseball.

“I played, you know.  The Houston Astros, papi.  Jose Cruz, Nolan Ryan, and JR Richard, I play with them, for a little while.  They would come to my house, even.  But I got injured, you know, and you gotta work, you know, so I come back here, and I work here.  Man, mijo, JR Richard would’a been a hall a’ famer if he didn’t getta stroke.”

JR Richard, in fine form before he suffered a stroke during a game, derailing his promising career.

When the elevator opens, Miguel says what he always says, “Alright, stay in shape, mijo, be safe on the way home.”

From there I wheel the wigs through the working class soup of Irish construction workers, Asians wheeling dresses and gowns across the street, Black men muscling huge rolls of raw fabric in and out of the freight elevators and Hispanic busboys unloading food trucks.  The street pulses with human energy, as these workers swarm among the street.  The process of Life, happening all around.

After I pack the wigs, I head to the post office and talk to Freddy as I toss wigs into First Class, Priority, and Express bins, inside the loading dock.

“I’m almost retired, three more years, man,” says Freddy.  “The job’s alright, I’ve been able to buy every power tool I wanted.  When I retire I can finally use ’em.”

Then I go to my favorite UPS man, to deliver more parcels.   He’s standing in the back of his truck on the street.

I throw him the parcels, one touchdown pass after another.  I really like the guy, he’s always fun to be around.  When he isn’t around, his truck is locked up, enveloped in the smell marijuana. 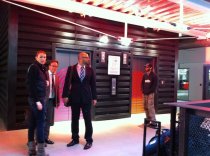 When I leave for the day, I take the regular elevator.  I get to wear regular clothes, not a uniform, and I went to college, so I stealthily blend in with the young professionals, who smell the same as they do at the end of the workday as they did in the morning.  Floor by floor, they enter, men and women expensively dressed down – sneakers and high end denim, maybe a hoodie under a sports coat – staring into their smart phones.  Most work in web based businesses that I couldn’t describe to you if I tried.  (Someone explained their business to me and I just got lost.  From what I absorbed, he punches numbers and letters into his laptop, and in return, someone from the great OUT THERE enters numbers into his bank account, and the number next to the dollar sign rises.)  For these people, smart phones and elevators do not work fast enough.  They punch the “close door” button repeatedly, they sigh when the interweb stalls on their phone.

They don’t have time for shit like that, they are the young professionals!  There’s a dog to walk, or a gym in which to work out, then more take out, then maybe some Ambien.  Everybody’s smug, and if you smile at them, they give you silent reproach, as if their lives are too fortunate to be happy.  Our bodies heated the elevator, everybody tries to find their own private space in the sardine can, eyes toward the glow in the palm of their hand.  I feel trapped, like I’m on a very uncomfortable blind date, or a shy orgy.  Don’t worry, it goes no farther than that, because, OMG, everyone’s desperately trying not to touch each other.

On the 4th floor, a very handsome lady – about forty – rushes into the elevator, searches for something on her iphone.  She was quite a sight, the archetypal modern professional, so New York, progressive in her views while wearing a sexy business suit in an elevator of men descending in a man’s world.  She owns her style, let me tell you.  But she keeps looking at her phone, pawing at it.

“OMG,” she looks at me and says. “I literally tried to find the ‘Lobby’ button on my phone, how silly is that?”

“And I’ll buy it,” she says.  “We all should.  The country’s going to Socialism, anyway, when they re-elect Obama.  We should spend all our money, because money won’t be worth anything after next week.”

The elevator door opens.  I follow her clicking heels through the lobby.  She walks through the door, out onto the street, then pauses.  Her mouth open, she points in one direction, then the other.  A perplexed look develops on her face, she looks at me, and for a moment she seems totally and forever lost.  Finally, she smiles and points to her right.

She click, clicks down the sidewalk, briskly yet delicately negotiating her way through the pagan savages that push/pull, raise/lower, construct/deconstruct and deliver New York City every single day.

Trust me, I’m not complaining about the class system in New York City, or my status in it.  Why would I?  I spent a month laughing and shooting the bull with Jose, Marco, Angel, Miguel, another Miguel, and my favorite UPS dude who shall remain nameless for obvious reasons.  For moments during the day, I communed with the fellows I did business with.  We did not moan and groan in each others paths.  We smiled, joked around, played football with wigs, and slapped each other on the back, encouraging each other.  I got to hustle heavy boxes of wigs down the streets and avenues.  Tired at the end of my work day, I went home, watched a little TV, then slept like a baby, not guilty for missing the gym.  I am in shape, mijo.  And I’m happy.

And be safe on the way home…