Greetings from Hollywood, just a few blocks away from the last Star on the Hollywood Walk Of Fame, just east of Highway 101. This part of Hollywood is the location to both Thai Town and Little Armenia – an interesting mix. The Thais control all the restaurants and massage parlours and the Armenians have a stronghold on the clothing boutiques, specifically the male jogging suit, a popular garment in the neighborhood that – seems go great with chain smoking, gold chains and shaved heads.

But I don’t think either group has control of the motel industry here on Hollywood Blvd. The motels possess a character that can only be linked to Pure-Blooded Faded Americana. Real classy joints like the Premier Motel (“Direct Dial In” & “King Sized Water Beds”), the Harvard Motel (“Adult Movies”) and the Hollywood Star Inn (“Clean Rooms”) are abound in the neighborhood. All harken from another time when Farm Boy or Farm Girl got off the bus in Tinseltown, checked into a modest room at one these fine establishments ran by a mothering motel clerk who would keep an eye out for starry-eyed kid as they made their way in pictures. Today, the motels are more like watering holes in the Land of Nod. Red-eyed wanderers meander outside the motels displaying the mark of Cain. Just like Cain, the land is not friendly to them – their crops never yeild. So they hover, underneath the neon Vacancy sign – bad Houdinis trying to disappear until they pass out somewhere.

Wasting in the Land of Nod.

The other day, I wandered through a group of Mexican day laborers outside the Home Depot on Sunset Boulevard. The weather – of course – was beautiful and one is never without view of a palm tree. I guess I was looking at one of these palm trees when I heard one of the trajaboderos yelling something at me in Spanish. He was walking toward me – the movement of his mouth seemed out of synch with his words – waving a fistfull of dollars, money bursting from his clenched hand. The money and his voice combined with the cool breeze in the warm sun made me feel – for a moment – as if I’d entered some sort of inverted universe where Working People controlled their lives instead being controlled by all-mighty Currency. Here in this new cosmos, a person could literally start with nothing and – through their own capabilities – build a fulfilling life that is its own reward and security and freedom and money is merely a thing to be waved in the air as if it were a party favor, to be thrown aside after it is used. What a world, I thought, but stopped thinking that when I noticed all the guys were frowning at me. One shook his head, looked down at my feet. I looked down to see spinning dice. I’d walked right into their crap game – rudely, according to the apparent disappointment of the fellows. I smiled and shook my head in a typical white aloof manner, then disappeared into the Home Depot.

After picking up a few things that I needed for the carpentry job I’ve been hired to do – I was hired by Independent Shakespeare Company to built the set for their summer productions in Griffith Park – I continued to walk along Sunset. Moments later, I passed the Bronson/Sunset Studios, then the Gower/Sunset Studios, and a few other studios. None of these were the giganto blockbuster studios, but they still carried a bit of that magical appeal the movies always give me, and they were surrounded by high walls, interspersed with wrought-iron gates and checkpoints like the bigger studios. Above the walls I could just see the tips of buildings – beyond the gates I could glimpse a little of the backlot. Walking next to the walls on the sidewalk, they seemed to actually lean over me. The tips of the iron gates were like speares. Then everything went Kafka – the walls started to talk to me. We show you, said the walls, just enough to know the magic is there. But we will not show you the magic. Go forth, back into Nod, and pay for the magic when we offer it to you.

“Man,”said Luis, my buddy who I’m saying with, who teaches an acting workshop in Burbank. “Where I teach, we have these giant windows that overlook two big studios. You can see right down into them and see what’s going on. Like it’s just a matter of getting on the other side of the glass.”

Luis is a company member of Independent Shakespeare – he’ll be protraying McBeth this summer. He’s a profoundly talented artist who like most others of the breed has to do a million different other things to pay the bills or almost pay them, then maybe eat afterwards. Something cheap. We walked passed some winos, then Luis jumped on the subway to go to teach in front of those windows and I walked further into Nod.

I spent the last 3 days building the set. I rode to and fro on the bus with various and sundry Mexican-American workers wearing polo shirts sporting the logos of grocery stores, bus boy or cook uniforms, or a name tag. Coming or going, they looked tired. I worked 12 hours each day – starting in the evening and working into the early morning. I was tired too, but I didn’t mind. I was fortunate, I suppose. My job wouldn’t last forever and I could look forward to whatever came around the bend next.

“Nice shoes, man,” said a man to the man sitting beside me.

“Thanks,” said the other man. His shoes looked to be nothing more than fancy tennis shoes.

“Well, you gotta be somethin’ to get some shoes like that, right. Say, I’m gonna be 57 on June 23rd. 57, can you believe that? My earliest memory is of my mamma buying me some shoes. Funny how that’s my first memory, right. Man, all growing up, we wore shoes until they fell off. Hey, you know if the Dodgers won last night?” 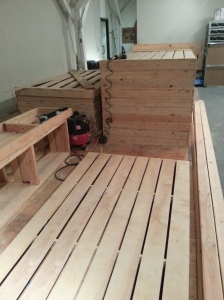 I sink into carpentry. I feel light on my feet and sweat buckets doing it. I kind of transcend into a meditative state, too. I used to hate carpentry – and hate being good at it – because back then I was an artist of the highest caliber and if you didn’t know that then I would be more than happy to tell you, then tell you that people like me have to toil the hours away because I don’t have it as easy as you. Carpentry nursed my victimhood, for I could walk around in my dirty sweat-stained clothes and artistic zeal and shout that, I will, nonetheless, continue the toil because that’s what strong artistic people do…and so forth.

I made my peace with carpentry some time ago. Since, then putting wood together has become some sort of cosmic transference, maybe even a type of madness that makes everything else disappear, even myself, especially myself. Caked in sawdust, bent over with my nose nearly touching the wood…saw, glue, staple, screw…whatever gets the job done…another piece down, another, another, then it’s 3am…stretch my neck…I’m a little dizzy…I smell the lumber in the air and I dare say I’m happy.

The night before I started the job, I took a walk into the Hollywood Hills. I walked up Beachwood which offers a clear view of the Hollywood sign, looming high just beyond a few small hills.The evening was cool after the sun had fallen. In the gloaming, pleasant people walked their dogs. They stopped to talk to each other as their dogs sniffed each other’s asses – the curious little creatures seemed content, never barked.

Lights in the houses on the hills started coming on, one by one. As more lights clicked on, these houses seemed to be suspended in an  milky ether with a little static electricity mixed in. I looked up at the Hollywood sign but couldn’t see it anymore, though I was much closer to it. All of the hills below the sign Hollywood that seemed so insignificant and small when I began my walk to the Hollywood sign, now surrounded me, towered over me – they even seemed downright impossible to climb, but for fortune, I suppose. Or something like it.