Last Thursday, I drove my friend, Karen’s car into Hollywood to spend the day with my friend, The Great Warrior. It was a beautiful day for a drive – late September had taken the sting out of the sunshine – so, with the windows down, I hopped onto Highway 101, into the fast river of traffic. 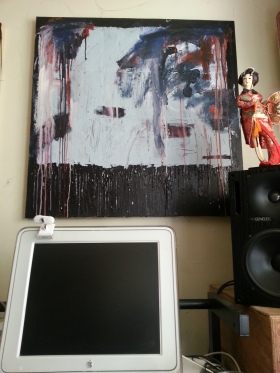 View from The Great Warrior’s throne.

The Great Warrior mixed smoothies for us as I looked over his resume in his office, which was cluttered with many boxes spilling out onto the floor. Last year, The Great Warrior lost the job he’d held for ten years, managing a TV production studio in Culver City. He’d spent the last on Unemployment, sifting through the countless boxes in the bungalow. It’d been a tough year all the around for The Great Warrior. After losing the job, he had to travel to Lafayette, Indiana to put his mother in an assisted living facility. She suffered from dementia and could no longer live alone. During this time, he also handled the sale of her house. He stayed in Lafayette until the house sold, packing up years of stuff and things that had accumulated over the decades into boxes, then shipped it all back to his bungalow in Hollywood. After making sure all was well with his mother and the house, he came back to Hollywood…where all the boxes were waiting for him. By then, “Get A New Job” was only a dimly lit sign way off in the back of his mind. But now, the Unemployment was ending – just like that, just as it always does – and “Get A New Job” was suddenly a bright and flashing billboard, with sparkles shooting off it and a deafening train whistle howling atop it.

He stealthily slid in between the boxes to hand me my smoothie – a concoction of some kind of protein dust and almond milk, among other things. I’m not generally a smoothie drinker, but you’re going to drink one, sooner or later, if you’re in California long enough. I slurped down the smoothie as I perused The Great Warrior’s resume – tweaking it here and there. After fitting nearly 20 years of work history into one neatly formatted page, bullet points and all, we saved it, finished the smoothies and headed for Malibu.

The afternoon traffic on Highway 101 was sleepy but swift. We made good time to Malibu Canyon, then took our time twisting and turning toward the Pacific Coast Highway. Somewhere along that curvy road, The Great Warrior asked, “So, are you gonna stay in LA, or head to Texas?”

For the last two weeks, I’d been on the fence about the subject. Money was running low and soon I wouldn’t have enough to do either. The anguish over deciding had led to near paralysis. I’d been staying up late at night, weighing the pros and cons of each choice, as I channel surfed from one news station to the next. FoxNews, MSNBC, CNN, back and forth, over and over. I still had no clue where I’d end up, but I was certain that not only was our nation’s mainstream media one giant, “stinking pile of shit!” I was certain no one loyal to any of these stations – Left or Right – had an accurate view of America. “These stations were specifically designed to corral viewers into fearful corners,” I cried. “TV’s a powerful tool and the f#$ck heads who control it have a huge responsibility for what they air. Suppositions or op-eds or speculation is all any of it is. No facts…only, ooooooh, what may happen if this or that might…or might not!!!…happen. It’s all a joke, a dangerous joke. Left or Right is a joke. But we’re corralled into one or the other, thinking it’s the way it’s always been…that you have to be either Right or Left…when the fertile middle where America really has a chance to grow is growing barren! Our only hope is to find that Middle America. And deep down we all know the America on TV is horseshit but the TV doesn’t want us thinking it just wants us to be scared enough to keep buying so we just–”

“It’s OK,” replied The Great Warrior, squinting through the windshield. “Once I realized that I was not part of a conversation and only a witness to a raving diatribe, it became a very interesting spectacle.”

It was around 2PM when we turned north onto the Pacific Coast Highway, at the giant Christian cross marking the entrance of Pepperdine University. The vast Pacific Ocean stretched out so far until it blended into the sky. Sun rays beamed straight down, spreading white-yellow streaks across the deep-blue water. To our right were harsh, cactus covered mountains with with semi-mansions nestled high on their ledges.

A few minutes later, just north of Malibu, I parked the car along the highway. We walked down the cliff to the beach and sat down just beyond the reach of the big waves crashing in front of us. A flock of seagulls milled about the beach for food. Surfers paddled out to the breakers, caught waves, rode them until they wiped out, then did it all over again. The surfers were like a pack of animals, communicating on a deeper level beyond words. They were never in each others’ way, nor were they too far apart from each other. They’d joined consciousness, I supposed.

“It’s a good time to surf,” said The Great Warrior.

“Because the sharks feed throughout the morning, and won’t go at it again until dusk.”

Sunligh shone through the waves just before they would crest, illuminating them to an opaque torquis, the color of old glass telephone insulators. The salt air came in strong on mist from the crashing waves. Waves building, cresting, crashing. Seagulls feeding to stay alive. Surfers surfing until they wiped out. Everything seemed so simple, mechanical. Even The Great Warrior was a simple event – sitting next to me Indian-style, squinting out over the ocean, picking up his smart phone to snap a picture as if programmed to do so at that exact moment, then lowering his hand, and resuming the long stare. And there I was, hung up on stay or go as if it were some complex, multi-layered riddle.

Surfer’s in the wild.

On our way back to LA, we stopped to eat at a little shopping center in Point Dume. In front of a gourmet coffee joint, gray-haired men wearing faded blue jeans, flip-flops and fleece sweaters conversed with each other as a gaggle of school girls sat at another table, giggling in unison as they tickled their smartphones. Across the walkway, in front of a burger joint, two tired Latinos wearing dirty work clothes spoke quiet Spanish as if language were merely a tool to stay awake. They reminded me of Vladimir and Estrogon, the two lead characters in Samuel Becket’s play, Waiting For Godot.

“That’s what you think,” says Vladimir.

A couple of tables down, sat a dirty, scruffy bum, about my age.

The bum and I were the same size and build, we even had the same hair color. I kept my eye on him, as The Great Warrior and I walked about the shopping center. He’d ask a few people for change in his aggresive manner, then disappear around a corner. After awhile, he’d come back, ask more people as they passed him by. Stay, then go, stay, then go…so simple. I looked for him after we ate, as we made our way back to the car. I didn’t see him. It’s time for him to hide, I thought. He’ll come out again. Then I thought, it’s no riddle, Todd. You’re not starving. Just make the damn decision. 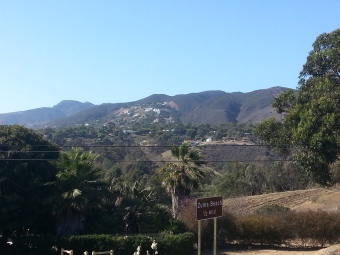 Later, as we wound our way back through Malibu Canyon, the traffic picked up. It was 5PM, rush hour had commenced and the primal instinct in the motorists was beginning to kick in. At the end of the canyon, the two lanes merged into one. As I began to merge, the pick-up behind me sped up and wouldn’t let me in the lane.

“Not me,” replied The Great Warrior. “I used to be that way, but now if somebody cuts me off, or if they started cursing at me or flip me off for some reason, I just smile and wave and act like I recognize them. That usually creeps them out, or at least takes care of any hostility.”

Traffic was bumper to bumper on Highway 101, through The Valley into Hollywood, in both directions. I hung out with The Great Warrior at his place for a while until the traffic died down. At about 8pm, I got back on the 101. Traffic was no longer bumper to bumper, but  it was still going strong. And fast. Red headlights – beady red monster eyes – sped by me, got in front of me. I sped up just to keep up with traffic. That’s when I started to feel it…the need to win. Soon, it was me swerving across the lanes, cutting cars off, finding that spot…that little spot of freedom where I can speed on with no red eyes in front of me. I’d come up upon a car like a cheetah to a gazelle. Then I’d zip around the metal corpse, onward, further into the Dark Valley. I was the predator. I was winning. It was all so simple.

But traffic backed up at the Ventura Freeway merger. As if programmed, all the beady red eyes slowed, found a lane and fell in line. 15 miles per hour. Nobody was winning. Nobody even tried to win. There was only obedience. The beady red monstor eyes became lifeless taillights. Across the freeway, hundreds of pairs of equally lifeless white lights obediently went the other way. There we all were, trudging along, with no choice but to keep going further in the in the same direction we were already inclined to go. I had a vision, then. I imagined a vast prairie with hellish fires lighting up the horizon in either direction. The prairie was barren, inhabited only by the occasional tumble weed rolling across it. A sharp cold wind blew hard across the prairie, creating a low, hollow whistle… 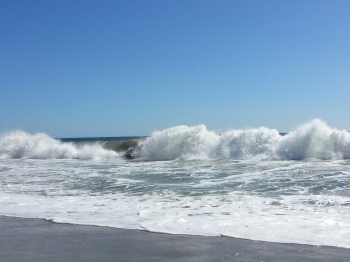 The car behind me honked. The traffic picked up so I sped up, further in the same direction with all the drivers on my side of the freeway, in the opposite direction of all the drivers on the other side, seperated not by a vast empty prairie, but just a thin piece of concrete. I felt sad, then. Nothing complicated about it, Todd. The road was designed that way.