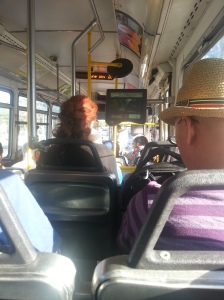 The projectors are rolling…

Last week, I spent a lot of time looking at the back of people’s heads – on the bus, behind the wheel waiting for red lights to turn green, in line at grocery, hardware and art stores. I didn’t see a lot talking – or communing in other ways – with anyone else. But I saw a lot of thinking. Or, I chose to see only their thoughts – their silence. In each little head in front of me was a miniature IMAX theater screening Le Grande Epic – but interpreting it differently. Behind the skulls of all the little heads, I saw lists of things that needed to get done that day. I saw worry over the possibility of some of those things not getting done that day. And, I saw the weary mixture of disappointment and consolation stirred by the fact that some of those things would have to wait until tomrorrow. That is, if the Great Projector didn’t break and our little IMAX went black – the only sound being Le Grande Epic spooling off the reel and falling, hollowly, to the floor.

When I am angry and tired, I tend to interpret Le Grande Epic as some kind of mockumentary-farcical-drama – comedic when I expect it to be serious and sad just when I think I’m going to laugh. Real people play puppets who the lead character can’t control. The lead character sacrifices himself over and over to spite his enemies – enemies impecably disguised as true friends, so well disguised, they treat him ill in no manner, whatsoever – those devious foes. It’s a bad film, to say the least. But when I’m angry and tired I proudly wear the lead actor’s thorny crown, and place the thoughts I want to see into all the little heads before me. 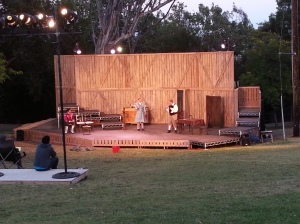 Why so angry and tired, you ask? No real reason, although I felt a little overworked, which was to be expected. The first show of Independent Shakespeare Company’s season in Griffith Park – She Stoops to Conquer – opened on Thursday, and all involved pushed through much exhaustion to get the show running. Producing a show is like herding cattled through a pencil sharpener. In the beginning, you can’t even see the pencil sharpener, and the bovine hoard moves along like a slow deep predictable river. This goes on for some time, and for a while time seems to be in abundance, even maliable. Then the pencil sharpener appears on the horizon – shakes a little from the pounding of hooves – so we work a little faster, longer, but we don’t go crazy. But suddenly – as if two or three weeks were completely cut from Time’s thread – the pencil sharpener is exponentially approaching. And – before anyone can do anything about it – the pencil sharpener is pulverized by the first hoof of the first cow, and only then do we think that maybe driving cattle through a pencil sharpener wasn’t the greatest theme to follow for a theatrical production. But we stick with the idea, for it is too late to change. We seek solutions – theatre magic – to make it appear as if cattle really are being driven into a pencil sharpener. This happens usually about a half-hour before the curtain goes up for the first show which, absolutely, must go on.

All shows are like this – to lesser or greater degrees – in my experience, and I have to say She Stoops to Conquer was a lesser degree or two than usual. But as opening night approached, the the time between searching for solutions, finding solutions and building those solutions amplified the electric currents in my head to sizzling levels and frazzled some brain wires.

But last week also offered a few moments of serenity and stillness. Tuesday night, I stumbled into one of these peaceful interludes, after the tech rehearsal started. In the calm, I was able to regain a sense of presence, to find the moment. The rehearsal started just after dusk. The hot day was gone and a cool invisible blanket covered the meadow. Not half an hour later, I was wearing a hoodie to keep warm. A few groups of people had wandered to the meadow and sat down to watch the rehearsal. Another group was having a party atop the abandoned bear cages of the old LA Zoo. Every now and then they would shout, cheer at nothing in particular while waving flashlights in all directions. When darkness had fallen, the lighting techs started to tweak the lighting. The light onstage flickered, shut off, brightened as the actors did their best to incorporate what they’d rehearsed onto a new stage. I felt far away from everything. 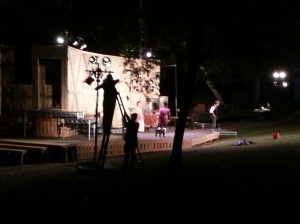 A technical rehearsal is a profoundly human portrayal of the human condition. The actors act, with no one “on-book” to feed them lines they can’t remember. They search their tired brains for the next word like grasping for life vests in blacknight water. Just as they are about to sink below the surface, another actor picks up somewhere further into the script and they continue on. They shake off the mistake and move about the semi-lit stage – getting used to costumes as they stumble further into the landscape of the writer’s mind. They a vague sense of this world, but the reincarnated souls of the characters obey the rules and do not inform the actors in which they reside. As the rehearsal continues, a few more pieces fit together. The show looks almost complete, as if one more spell by the Great Theatre Witch needs to be cast. A candelabra breaks, flowers fall out of a vase, and the sword fight looks a bit sloppy, but that’s the way it goes. Maybe things will be a little tighter tomorrow. At a certain point, the only solution is tomorrow. You don’t take groceries out of the bag, put them on the shelf, then put them all back on the counter and start checking out again if you bitched at the clerk. And the bus driver’s not going to turn around if you miss your stop. It’s just “sorry” to the clerk and a longer walk home – and you’ll be damned if you’re so cruel or absent minded tomorrow.

The cool darkness grew heavier during the second act. The actors moved about the stage like Scooby Doo and the Mystery Gang. I walked from side to side, behind everyone – checking out the stage from all directions to see if anything needed to be fixed. I noticed the back of everyone’s heads again. There was the director, Melissa’s head, Marcos’, Liam’s and Cassady’s – the interns – heads, and there was the back of Cat’s head as she viewed the show on a ladder next to a light, Laura’s – the stage manager’s – head. All were watching the same production, but their views of the world unfolding in front of them were as vastly different as they were as individuals.

The coyotes in the park began to call to each other. This excited the gang of flashlighted humans above the bear cages, and they began to shout and howl back at the coyotes. For a simple quick moment, there was absolutely no difference between humans and coyotes. Then suddenly – as if on a timer – both packs of animals stopped howling. Slowly, I began to hear crickets. Then, softly, the voices of the actors reached my ears. I became aware that it was really cold, despite the hoodie I was wearing. As I rubbed my arms to warm myself, a very old memory came back to me. I was sitting in a movie theater in Corpus Christi, Texas – I was around 7 years old. There was a clock jutting out of the wall, to the side of the screen, near the exit. It’s hands were illiminated – just before 3pm. I remember’d thinking that time didn’t matter as long as the movie was playing. Time – with it’s brutal potential to hover like God over us – could be obliterated as long as we continued to tell Our Story. That was about as Cosmic as I got last week.

Come out and see a show! Griffith Park, 7:00pm, Thursday thru Sunday until August 31st.

She Stoops to Conquer opened Thursday night. I heard people really loved it. I would think so. It’s a big, busy, fun farce that has a lot of heart and it’s performed and directed really well. You actually believe you’re seeing the cattle enter the pencil sharpener. Some things came together perfectly, some didn’t, but the things that didn’t were probably not even noticed by the crowd. And any mistakes that were noticed were hardly minded at all. My friend, Claudia – a performer in the play – lost her skirt onstage. It got caught on the door. “The crowd got a good laugh when I slowly pulled offstage from behind the door,” she said. How do you start over after something like that? There’s only tomorrow.

Tomorrow, and tomorrow, and tomorrow,
Creeps in this petty pace from day to day,
To the last syllable of recorded time;
And all our yesterdays have lighted fools
The way to dusty death. Out, out, brief candle!
Life’s but a walking shadow, a poor player
That struts and frets his hour upon the stage
And then is heard no more. It is a tale
Told by an idiot, full of sound and fury
Signifying nothing. 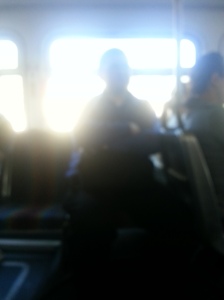 The Light behind Reality.

That’s the famous sililoquy in Macbeth, spoken by the title character. Macbeth is Idependent Shakespeare Company’s next show of the summer. It opens next week. It’s much heavier, much darker than She Stoops to Conquer, but immediately after humanity’s last recorded syllable, all our dramas and comedies will have appeared to be the same tale.

I fixed a few things on the set before the show on Friday, but left before the curtain went up. The heat of the day had gone, but the concrete at the bus stop released all the heat it had absorbed during the day. It was that dusty end-of-day summer heat that – even without a speck of dirt on your person – sinks into every wrinkle and crevace on your body and makes you feel nasty. I praised all the All-Mighties when I boarded the air-conditioned bus, then stared at all the little heads before me with all those little thoughts and all those little tomorrows. But for some reason, I slipped into Dark Yesterday. Soon, I was thinking of ways I could’ve made the set better. This, that, not that, or even that, Jesus, that would’ve been much simpler, you idiot! From there – naturally – I began to think of ways I could’ve treated ex-girlfriends better, then to things I should’ve told my father and close friends before they died. Then came the flood of a million other shoulds and shouldn’ts until I found myself reaching out in the blacknight water for life-preservers of memory – those moments when only just words were spoken and just actions were made in the moment.

A blurry fountain. No, I did not take a picture of her boob.

I couldn’t find those moments, however, and when the bus stopped, all I had to save me from the stagnant waters of The Past was a young Mexican-American mother with a boob hanging out of her blouse. I let her exit the bus before me. She was holding an infant – and with one arm fastening child-to teat, and the other lugging her grocery bags, baby bag, purse and stroller, she stepped out on the curb and waited for another bus. She wasn’t even home yet, she had at least one more bus to go. Or, maybe she wasn’t going home. Maybe her tomorrow had already begun. Wherever she was going, she looked too busy juggling that baby to be stuck in The Past.