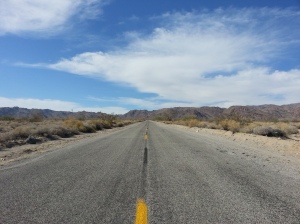 Last Friday, I left for California in a 2013 Chevrolet Impala. I ordered a tiny economy model, but the clerk offered to superzize me, so I took the Impala. The car didn’t idle and I had to press the pedal thoroughly to get the car to even move. But when I did the engine roared and before I knew it, I was going 70mph. The car was not a muscular beast in the great hierarchy of motorcars, but compared to the gerbils under the hood of the economy cars I’m used to renting, the Impala contained something not unlike a pride of lions under it’s hood. I spent the ride out to the interstate just getting used to the extra power under my foot.

And I listened to Willie Nelson’s latest song on the radio. “Let’s Face the Music and Dance” is an old standard written by Irving Berlin in 1936. Willie’s version is a mello yet haunting tune with kind of a dark jazzy-nightclub feel, and his guitar picking is brilliant in his own simultaneously delicate and rough way. The recording is smooth the way folks say whiskey is smooth, which is not smooth at all, but potent with dizzying fumes, slightly sweet and flammable.

By the time the song ended I’d found the rhythm of the Impala and in no time I was past San Antonio, heading west on Interstate 10. The speed limit was 80mph. I set the cruise control at 82 because I’m a rebel and handled the purring car with two fingers on the steering wheel and settled in for the long straight ride to El Paso. Soaring into spacetime as the satellite radio fed songs into the car from an invisible umbilical cord. I’d made the same trip on I-10, 13 years ago, when I moved to LA to make it big. I remember dead spots along the drive, where I couldn’t get any radio action.

Where were those dead spots? I thought. What was I wearing? Ah…Levi’s, t-shirt, Converse, just what I’m wearing now. Gee some things never change. The sky was big, just as it was back then. But it was cloudy 13 years ago, remember? I did. But this time, it was hot and dry – barely a cloud in the sky, less clouds than circling buzzards. I ran into rain storms back then, remember? Remember how excited I was to set forth into the world? Remember? I believed I was fated to head west, remember that, silly? I told myself to shut up, then, and focused on the view. Closed down motels and gas stations were sprinkled along the west Texas drive. I’d already passed Junction, the next town would be Fort Stockton, 100 miles away. I checked my gas gauge to find I was nearly on empty. Back then I didn’t even have a cell phone. Running out of gas was a real drag back then. But wait, you have no cell service out here, so if you run out of gas…Shut up!

Luckilly, I came upon a tiny gas station. I got out of the car and immediately felt the heat. The horizon glimmered all around me. The tiny store’s air-conditioner rattled like it was filled with half a million Mexican jumping beans. 18-wheelers roared down the interstate. Buzzards were silent, high in the air. The fuel pump shut off and only then did I realize that the gas was marked up 50 cents more than the bigger stations closer to the cities. I thanked the clerk inside – despite the mark up – because I’m sure 50 cents would’ve seemed absolutely insignificant if I was on the side of the road and nobody was stopping as I wandered in the ditch with my phone in the air trying to get service.

18 wheelers owned the road – long frieght trains sped along side the interstate. What will become of the semis and freight trains now that we have the 3-D printer. Then somewhere east of El Paso my thinking inevitably drifted into philosophy. Will the 3-D printer do to to the long haulers what the Yucatan astroid did to the dinosaurs. Will the next species of mammal to rule the planet dig up the semis and locomotives from out of this desert and put them in a museum next to clay models of us?

The desert changes before your eyes as you drive through it. Mesquite trees and huisache bushes give way to cedars, then the cedars disappear and ocotillo cactus grows everywhere. Then the giant saguaro cacti replace the ocotillo. It’s like the desert is moving along with you, and from such movement I can grasp the impermanence of reality a little better. From such impermanence, I gain a better understanding of the nature of freedom. I know there’s a destination ahead – there always will be. But before I reach it I can be anyone, anything I want. I can say anything. Nothing holds me down, there are no bills, no jobs, no place I have to reach in life at this age or that age and regrets can’t travel at the speed of the desert. When I am Moving – Out There – I am perfect in the image I want to be. But as soon as I slow down I become aware of destinations, gas gauges, bygone eras…

…traffic. Road work. Highway patrol. The remnants of a blown out tire. The Carnal World will always find me and bring me back from Out There. What can you do but obey? Shut up! But you know I’m right. Yes, I know, I know. I flow – slower – with the traffic toward El Paso. There’s no cactus – only tumbleweeds. But there will be cactus again. Yes, there will be. See that closed down gas station, crumbling and broken? I see it. It was a lifesaver in the wilderness another time. Quite possible. Has progress tamed the deserts? Do our trusty cars get us to the cities more efficiently? Have we lost the need for outposts? I didn’t answer my own questions, but I didn’t stop philosophizing. I went deeper, all the way to…Did we tame it, or has the desert rejected us, instead? Like skin rejects broken glass or thorns. Are we the foreign object that Mother Earth is trying to purge?

I turned the radio up loud to prevent my philosphy from drifting into prophesy, for I’m only able to predict doom. I’d arrived in El Paso and it was getting dark, but I kept going, leaving Texas until I got to Las Cruces, wher stopped for the night. After checking into a motel, I took a walk on jello legs. The day’s lingering heat lay over the night like lace.

The next morning – in Arizona – I pulled over to take some pictures of an old gas station. It had a No Trespassing sign on the wall. There was an old trailer house behind it, also displaying a No Trespassing sign. It’s door swung open and its windows were dusted over. Snap. Snap. I was creeping closer to the trailer to get a better a shot when a dog jumped out from the open door and barked at me. It had a leash around its neck, which was holding it back from coming toward me. I ran-walked back to the Impala, the dog barking all the way. It was barking as I pulled out of the station and drove off. Somebody lives there. I guess so. What do you thing they’re like? I don’t know. Can the radio go up any higher? Yes, it can.

Satellite radio changes the journey across a desert, completely. There’s no falling in love with a cool local station only to have it snap, crackle, pop and leave you in the middle of your favorite song like a well-meaning yet flighty lover who only an hour ago was happy and wanted to be with you forever. With satellite radio, your favorite songs don’t disintegrate into static. You may always finish the song, and listen to the same DJs clear across the country. You are in control. But that kind of control comes with a drawback – I got tired of listening. Period. Even satellite radio stations play set lists. I began to feel a visceral negative reaction to songs – even great songs – if I’d heard them two or three times. Maybe we need the heartbreak of the fading radio waves. Back to philosophy, dammit. Maybe we need things to be beyond our control. Maybe we need things taken away from us just when we think they will be there forever. Maybe its the longing that gets us to the other end of the desert. And 3-D printers be damned, there will always be a desert to cross.

About 100 miles east of Tuscon, my mind went blank. It came back briefly in Phoenix, when I realized I was staring at a sign in the sky and reciting the words of that sign over and over in a German accent…

This concerned me, so I tried to focus. There were only whirlwinds and memories for many miles past Phoenix. Both were popping up anywhere and anytime, then were gone just when I realized they were there.

Then I crossed the Colorado River into Blythe, California. Blythe’s like any sub-city you’ve ever been to – dudes with ponytails, smoking outside a grocery store that was across the street from a closed down grocery store. I got a coffee to stay awake. It went down harsh in the 107 degree weather as I walked back to the car.

And it only kept getting higher. It was 112 when I pulled off I-10 and into Joshua Tree National Park. The interior of the Impala grew warmer and warmer – the air-conditioner losing to the heat. Higher and higher – in degrees and elevation – I drove into the desert. For some reason, I kept going slower and slower until I pulled over, killed the engine, got out.

The hot air immediately embraced me as I walked further into the desert. I sucked in deep labored breaths – felt moisture rise to my skin, then disappear. Joshua trees stood here and there. There was absolutely no wind. Dust – kicked up from my footsteps – hovered just over my ankles. Nothing was moving. No sound, only those sounds I made as I moved. I walked to a bluff and saw the interstate far below. I could make out the 18-wheelers, but the roar of their motors couldn’t reach me. I liked the quiet – it had shape, like the hills, the trees and the sun that all worked together to create the silence. It’s too hot. I walked back to the car, gasping slightly for air, my legs heavier with each step. The car looked so far away, it didn’t seem like I walked so far. A beautiful barren land of silence, but deadly, should one feel foolish to become part of it.

I am writing to you from sazzy Hollywood. I was hired to build a set for the Independent Shakespeare Company, in Griffith Park. I have friends in the company and I’m looking forward to a lot of fun and hard work in the sun at the edge of Western Civilization. My friends’ little bungalow apartment – just between Sunset and Hollywood Blvds – will be El Jamberoo headquarters for the summer. Then who knows? Maybe another desert journey – of one kind or another.

The shape of desert life…

But I won’t get ahead of myself. I will be Here, with my friends, and that is good enough for now. Talented friends, too, for, much like a cactus thriving in a desert, Independent Shakespeare Company thrives by doing theatre in Movie Town. They do it out of passion, and because – so many years down the road – Shakespeare is still relevant. The modern world needs Shakespeare, just like we still need deserts, longing and broken hearts.